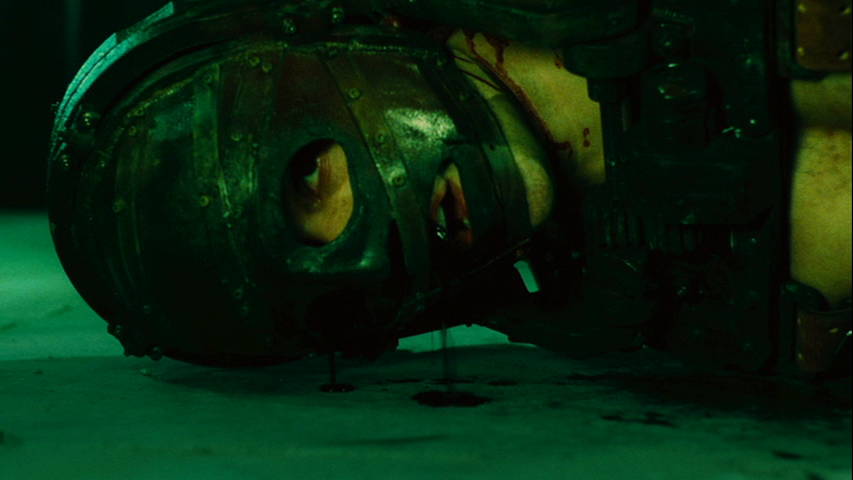 WARNING: THIS WEBPAGE IS FILLED WITH SPOILERS. LEAVE NOW IF YOU DO NOT WANT TO BE SPOILED ON SAW (2004) AMONG OTHER TRAPS.

The Saw franchise made its debute in 2004, a film about two strangers waking up with chains to their feet, no idea how they got there. From there, there were eight other movies that followed suit, all (presumably, i haven't seen them alL) tying into the original plot point: A man has cancer. Although his cancer is not the final straw to inspire his trappings, his advocacy for living a life worth such was... interestingly displayed throughout these films.


I particularly love this franchise because even though you have a character who is so obviously twisted and does things in his vigilante, "my opinion is law", sort of sense, he fights for a cause. It's admirable. Jigsaw fights for life worth living; and even though he has killed many in the process, some could say that his methods are accurate. Although, I personally would argue that the traumatic situations he puts people through, near life-or-death calculated situations with little-to-no escape, could be enough to end lives if survived, but I digress. 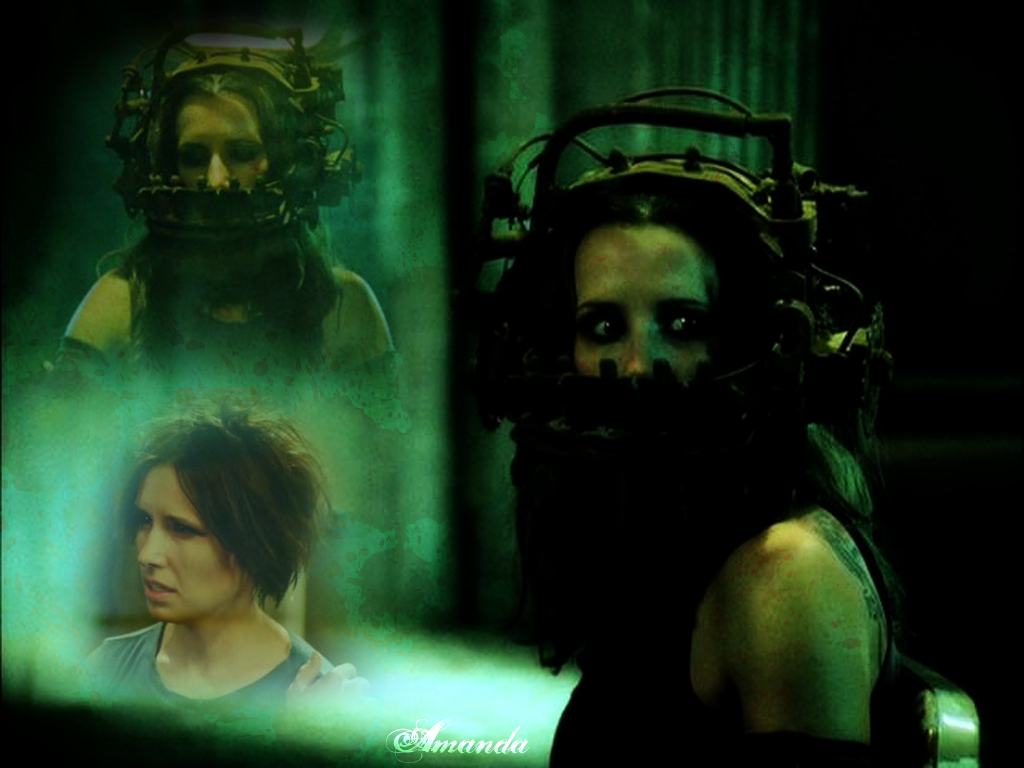 A lot of what makes Saw, Saw, is the ethical dilemmas that persist due to the nature of the traps. Many seem impossible to conquer, and ultimately just a gruesome "fuck you" to the person trapped in it. Although the motives are questionable, I must say that I really admire the craftsmanship of JigSaw for being able to perfectly execute, most (probably most, I have not finished the series even though I love it so much), if not all, of his traps in his plans. The engineering talent it would take to create a reverse beartrap, find locations to do this in a discreet area, as well as even finding these people and executing his plans with many traps inside of traps, it would be amazing. His talent is limitless, and I almost wish his cancer/failed suicide motivated him to be an excellent crafter. What was his job before becoming jigsaw? You'd have to be smart in order to have everything perfectly timed and to be able to flee/trap the cops on multiple occasions.

A lot of the "horror" aspect of this franchise falls into one of two categories: Empathy, and Ethics.

Empathy is shown to be a horror tactic used, a lot of these situations would be terrible to go through yourself. Emotions that may arise as you watch this series could be: disguist, joy, among other emotions I cannot identify at the moment. Ethics has a great hold on this series, as it gives you a solid villain, an antihero, to fight for. The ethicality of, "Does this man deserve to be put in such a treacherous situation because of x crime?", "Someone called in from work sick on multiple occasions, and is now being put in a life or death situation to change, is that right?", "Why does self medicating and harming meet the criteria for having to kill your boyfriend to stay alive?", and "Does making yourself the judge, jury, and executioner actually benefit anyone? Is vigilante justice ever moral?", or, "Do any of these traps work? The desired outcome is a changed life, but change is natural. No one person will ever stay the exact same. Is it even worth it?". You know that Jigsaw, on some level, does not want to actually help these people. He wants justice. He wants revenge. He wants to be able to see whenever those people he finds degenerate and disgusting writhe in pain, that they are getting "what they deserve".

SAW TRAPS THAT WOULD FUCKING KILL ME:

Ranked From Easiest to Hardest to Kill Me With:

This trap is just one hard thing after another. Every time you think, "How could this get worse?", it does. It somehow does. On top of being completely naked in a dim room (violated), he has a slow-acting poison coursing within his veins. You think, "Oh, he's going to die". Here's the actual sawtrap: The antidote to the poison is in a safe, and this man has the code to it. (Woohoo!) But, the code is written on the walls of the room (impossibly long script), and he is only given a candle in order to read it. He also is smeared in a highly flammable substance. There is also glass on the floor. I don't know what this man did to get the saw trap, but it just seems really over the top and hardcore. Destined for failure, he burned himself alive.


MY LOVE FOR SAW

My love for Saw knows slight bounds. The grime-y atmosphere of the first and second movie keep me coming back to watching them, admiring the lengths they are able to portray gore without actually doing so (how well the acting and camera work is, without them ACTUALLY going through the sawtrap).

I first got introduced to the series through my brother, and we watched them as I was younger. I remember the mindfuck that was the second film, how it all connects together, and rewatching it knowing how it's going to end always makes me excited.


SAW TRAPS THAT I COULD DEFINITELY BEAT:

Although it is probably not best to admit this on public record, I touch my eyeballs with my grimey hands every other day. I used to not wash my hands before and after putting in my eye contacts when I wore them, there are probably diseases not even heard of in the little breeding grounds that is my eye sockets. I have no fear of eyeballs, or of hurting my own. The rules of this trap are simple: 1. 60 seconds to find the key, 2. Unlock the device in order to remove it.

I think realistically speaking, I would not win this trap. The main "horror" aspect of watching this resides in empathy, and the common fear of touching ones' eyes. Close-up, freakout, frames are produced in order to show how close the subject is to touching his own eyeball. Considering that it takes me 60 or more seconds to unlock my own door, one that is known to me, I wouldn't unlock wherever the key hole is on this one. I think the pain of slicing my eyeball with just a random fucking blade I am given would also take me a bit more than 60 seconds to conquer. But, one could argue that in such a life-or-death and time-limited situation, someone's brain would be fast acting. I obviously have mixed feelings on if I could do this or not.

This trap is also a little easy to comprehend: 1. A reverse beartrap is placed connected to Amanda's upper and lower jaw, if triggered, it will rip apart Amanda's upper and lower jaw with equal force, killing her. 2. The key to the trap is placed within the stomach of the pronounced dead boyfriend, 3. Armed with knife 4. Oh shit! He is actually alive! 5. There is a timer for how long until the beartrap will be triggered.

This trap is one of my FAVORITE to watch because of how cinematic it is.. you think for sure that he is dead, and then suddenly he's pleading for his life as she's trying to save hers.

I think if I were actually put in this trap, I would try to not kill them, maybe I wouldn't even cut them open. Maybe I would just have my skull ripped apart. I assume that if I were to take whatever utensils were given to me, I would butcher it so poorly that the natural consequence of me even trying would be their death. 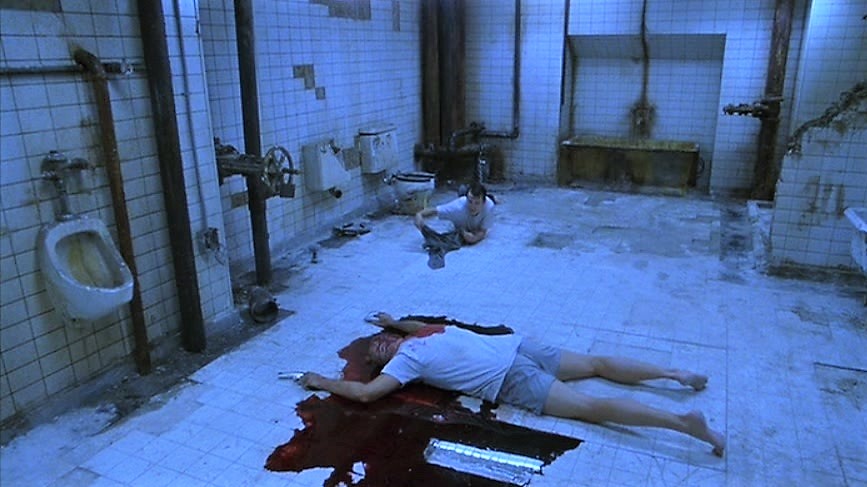 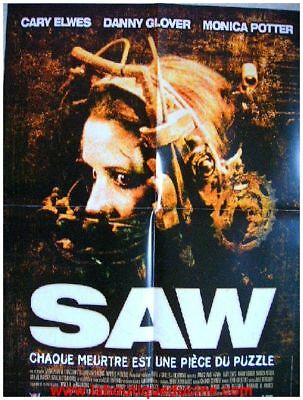 * this page WILL be updated as i continue to watch the saw franchise < 3 stay tuned!